The mind bugging political question begging for an answer is ‘who is the best candidate for all’? Who among those gubernatorial candidates will emerge?

The steeplechase is on. The 2018 governorship election is near than we ever imagine. The baton will be changed, and power will change hands. The duel among candidates to take over the most coveted sit in the state at Abere seems to be hot with new faces getting set to take up the mantle of Bola Ige House.

However, from our analysis here, we believe there are major 5 gubernatorial candidates to contest the OSUN 2018 Gubernatorial election.

Take your time to go through the profile of the major gubernatorial candidates selected below.

A former deputy of the state of the state, Iyiola Omisore was born on September 15, 1957, into a royal family in Ile-Ife, where he also grew up. He is the son of Oba David Olajide Omisore and the grandson of Lowa Omisore, both of Ayepe, Olode.

Iyiola is also the grandson of the Late Olufewara Kabiyesi Oba Titus Adetoba of the Oseganderuku ruling house in Ifewara where his mother, Princess Emila Adejola ruled as Regent until her death in 2006. In August 2006, his father was crowned as the first Olu of Olode Town in Ife South Local Government Area of Osun State.

Senator Omisore began his educational career at the SS Peter and Paul Roman Catholic School in Ile-Ife before proceeding to St. John Grammar School Ile-Ife, Osun State, for his secondary education between 1972 and 1977.

With two engineering degrees and a postgraduate certificate from Brunel University Uxbridge, as well as a Ph.D. in Infrastructure Finance from the International School of Management, Paris, France, Omisore was set to excel. He is currently undergoing his DBA programme at the same institution.

In January 2013, he completed and was awarded a Doctorate Degree by the International School of Management in Paris.

Omisore commands so great an influence in the political space of Osun that he won an election while in detention. He has held so many offices as a legislator including chairmanship of committees.

Many, however, believe that his administration, if he wins, will be full of excuses and complaints having been quoted as saying that it will take 22 years to clean up ‘Aregbesola’s mess’ in Osun State. They said he would blame whatever inadequacy on the previous administration.

Alhaji Moshood Adeoti is an astute politician who has distinguished himself over the years. Sheehuuu, as he’s fondly called by his supporters, is a grassroots politician of great repute

Alhaji Adeoti was born more than 60 years ago in Iwo and studied Business Administration at the University of Benin.

Adeoti is a political icon who has proven himself beyond reasonable doubt to be a manager of human and resources. He is known for being a man with depth knowledge of nurturing political parties from nothing to something.

READ ALSO: OSUN 2018; A Clarion Call To The People Of Iwoland By Ojubanire Youth

Alh Adeoti in one of his biggest political breakthrough defeated almighty Sen Sunday Fajinmi to become the state Chairman of Alliance for Democracy, a party that later metamorphosed to Action Congress. He was retained as the pioneer state Chairman of the party, a party Ogbeni Rauf Aregbesola used to contest in 2007.

Adeoti was incarcerated after the violence that greeted the 2007 election but he was consistent and determined throughout the legal battle that returned the mandate of Aregbesola.

Alh Moshood Olalekan Adeoti was appointed the Secretary to the State Government since 2010.

Sheehuuu has one unique selling proposition and that’s his ability to relate to people of grassroots cutting across all divides.

Akinade Akinbade is a grassroots politician of many decades and an administrator par excellence. Born in 1955 in Ogbaagbaa-Iwo. He attended schools in Iwo and Ile Ife and he’s a qualified engineer.

Akinbade worked with Delta Steel Company in Aladja, Delta State, and was Chairman of the company’s Finance and Multipurpose Committee. Akinbade joined the Osun State government, working for over sixteen years under three military administrators.

After the military regime in 1998, he contested for the primary for the position of the governor and lost. He later became the chairman of PDP, the opposition party in the state. The party later dislodged the defunct AD in Osun State and was subsequently appointed In 2003 as Secretary to the state by Olagunsoye Oyinlola.

In 2004 Fatai Akinbade was chosen as the leader of the Party in the Iwo Federal Constituency.

Alh Fatai Akinbade contested on the platform of Labour Party in the 2014 governorship election.

However, he returned to PDP to contest but failed to get the ticket. Fatai Akinbade is the flagbearer of ADC

Alhaji Fatai Akinbade has a strong root and political connection throughout the state!

The PDP flagbearer gained political limelight when his brother, a serving senator, died in mysterious circumstance. He promptly filled the vacuum after winning the by-election in what many called ‘sympathy vote’.

A serving senator of the Federal Republic of Nigeria, Ademola Adeleke was born to the family of Ayoola Adeleke – a Muslim father and Nnena Esther Adeleke – an Igbo Christian mother on May 13th, 1960 in Enugu. His father was Late Senator Raji Ayoola Adeleke the Balogun of Ede land in Osun State, a second republic Senator with the defunct Unity Party of Nigeria (UPN).

However, he did not finish his education at Muslim Grammar School[ as he later left Nigeria to study abroad with his two other brothers on a scholarship. He started higher studies at Jacksonville State University Alabama in the United States of America where he was majoring in Criminal Justice and minoring in Political Science.

He is known as an accomplished businessman and administrator, making waves with lake brother, Isiaka. The man who has come to be known as ‘dancing senator’ will need to fight off the stigma of certificate forger to lure voters to his side if he must have anything to do wit Abere Government House after September 22.

Currently the Chief of Staff to the Governor of State Osun, Gboyega Oyetola is described as a man endowed with untold skills that cut across politics, finance management, business and public administration. Through a dint of hard work, Oyetola has steadily progressed in the affairs of life.

Born in his native Iragbiji, Boripe Local Government Area of Osun clan, Oyetola attended Ifeoluwa Grammar School in Osogbo for his secondary school education which he completed in 1972 and proceeded to the prestigious University of Lagos where he bagged a Bachelor of Science (Honours) degree in Insurance in 1978. He followed it up with a Master of Business Administration (MBA) at the same institution in 1990.

Oyetola’s professional life kicked off in 1980 when he joined Leadway Assurance Company Limited as Area Manager and worked there till 1987 and joined Crusader Insurance Company Limited as Underwriting Manager between till 1990. He moved again in 1990 to Alliance and General Insurance as Technical Controller and served in that capacity until 1991. In the same year, he set up his own Company, Silvertrust Insurance Brokers Limited, which he managed until his appointment as Chief of Staff in 2011. 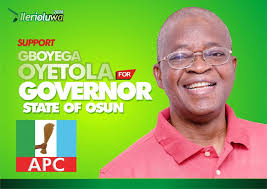 A technocrat of great repute, Gboyega Oyetola’s progress in politics has been encouraging. He was a founding member of Alliance for Democracy (AD) in the state of Osun and has been a chieftain of the party through its metamorphosis to Action Congress (AC), Action Congress of Nigeria (ACN) and now All Progressives Congress (APC). Also, he has assisted the party nationally, particularly in the State of Osun.

Those are the major gubernatorial candidates for the September 22, 2018 election.

OSUN 2018: September 22 is closer than before. People will decide the new face that would occupy the premium seat at Abeere in Osogbo among the gubernatorial candidates. We are certain, one of these candidates listed here will emerge.

Analysis of Osun Governorship Aspirants from Iwoland By Yusuff Mutalub

Are You in Love, Lust or Simply Infatuated? 13 Differences Among...

7 Reasons Why You Must Invest in Your Children